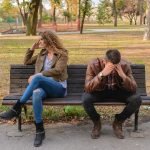 5 Ways NOT to Say Sorry

More than anything else, I would argue the vast majority of day-to-day conflict is caused by misunderstanding.

Stephen Covey, the author of The 7 Habits of Highly Effective People, writes that people tend to approach things autobiographically – meaning that our approach to conflict is shaped by our own experience, our own motives, our own fears and frustrations.

This issue with this is when someone’s response or feelings fall outside of our understanding we often handle it poorly.

We can’t understand why the other person is upset, so we immediately jump to thinking their feelings aren’t valid or they’re over-reacting. This usually leads to non-pologies like “I’m sorry you feel that way” and “the BIG DEAL.”

When we’re dealing with conflict, it’s important to recognise that the other person might be coming at things from a totally different perspective. The couch story I shared in Part 1 is a perfect example.

From my perspective, the idea that someone could get upset over a couch blocking a doorway was totally unthinkable. But from the perspective of my friend, who had endured the terror of a house fire when she was younger, it was perfectly understandable to panic when I blocked an exit.

Covey writes that when we’re facing conflict we should seek first to understand, then to be understood. When I was willing seek my friend out after she stormed off and say “Hey, I’m sorry if I upset you back there with the couch,” she was able to feel comfortable enough to share about her past with me.

Looking back, it was a real breakthrough in our friendship and we grew a lot closer because of it. But if I had told her to stop overreacting or I had refused to acknowledge the conflict at all, that breakthrough would never have happened.

In a situation like this, an apology is a chance to open a dialogue with the other person. Your willingness to be humble and admit your mistakes will often be the opportunity the other person needs to get a bit vulnerable and open up to you.

More often than not, when someone is hurting and you listen with a sincere desire to understand, you’ll be amazed at how much they open up to you. People want to be understood.

The other important thing with seeking to understand is that, unless you’re WAY better at this than I am, you won’t be able to do it in the heat of the moment.

When things get heated, it’s easy to just believe you’re right, they’re wrong, end of story. Far from genuinely wanting to understand the other person’s perspective, you’re probably just angry/frustrated/upset/scared/all of the above. Yup. Me too.

When this is the case, it’s important to step back, both literally and figuratively:

Literally: Let the other person know that resolving this issue is important to you, but that you need some space to clear your head first. I usually go for some variation of “Hey, I really want to resolve this, but I don’t think I’m in the right mindset right now. Can we take a break and come back to this when we’ve had a chance to cool down?”

Once you’ve stepped away from the conflict, take a deep breath and do whatever you need to do to get back to emotional equilibrium. Do some exercise, listen to music, watch this video of a rabbit eating raspberries.

Figuratively: Now that you’re outside conflict ground zero, try to mentally step back from the problem. A good way to do this is to try to look at the conflict from the perspective of an objective observer, rather than a participant. Picture the conflict in your imagination from the outside, like you’re watching yourself in a movie.

A recent study found that those who were able to mentally step back and reflect on their conflict experienced less emotional distress, were less likely to blame the other person, and didn’t dwell on the experience (replaying it over and over again in their minds).

Stepping back means that when you do finally address the conflict, you’ll have a better perspective on it, you’ll be keen to understand where the other person was coming from, and if need be, you’ll be ready to apologise. More on that in Part 3.

This post is Part 2 in a three part series on conflict resolution. Read Part 1 here and Part 3 here.